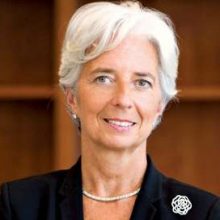 Christine Lagarde, (born January 1, 1956, Paris, France), French lawyer and politician who was the first woman to serve as France’s finance minister (2007–11), as the managing director of the International Monetary Fund (IMF; 2011–19), and as president of the European Central Bank (2019– ).

Lagarde was educated in the United States and France. After graduating (1974) from the prestigious Holton-Arms girls’ college-preparatory school in Bethesda, Maryland, she studied at the Law School of the University of Paris X-Nanterre, where she lectured after graduation before going on to specialize in labour law, in which she obtained a postgraduate diploma (DESS). She also acquired a master’s degree in English.

In 1981 Lagarde joined the international law firm Baker & McKenzie in Paris. She was made a partner in 1987 and became the first female member (1995–99) of the executive committee. She was made chairman of the executive committee in 1999 (reelected 2002) and moved to Chicago. At Baker & McKenzie she promulgated a “client first” approach whereby lawyers anticipated client needs rather than solely reacting to exigent situations. As a result, profits at the firm rose strongly.

While a member of the Center for Strategic & International Studies (CSIS), Lagarde led the U.S.-Poland Defense Industry Working Group, advancing the interests of aircraft companies Boeing and Lockheed Martin against those of Airbus and Dassault Aviation. In 2003 she was a member of the CSIS commission that culminated in a $3.5 billion contract for the sale of 48 Lockheed Martin jet fighters to Poland. Despite what struck some French observers as a conflict of interest, Lagarde in March 2004 received an appointment to France’s highest order, the Legion of Honour, from Pres. Jacques Chirac, who described her as a role model and a charismatic leader.

Lagarde returned to France in June 2005 to join Prime Minister Dominique de Villepin’s government as trade minister before becoming (briefly) minister for agriculture and fisheries in 2007. As trade minister, she encouraged foreign investment in France and the opening of new markets for French products, particularly in the technology sector, helping exporters through the Cap Export mechanism, which she launched in September 2005.

In June 2007 Lagarde was designated finance minister by newly elected Pres. Nicolas Sarkozy. She was the first woman in the Group of Eight countries to hold this influential position. Her appointment reflected the end of a political leadership dominated by antiglobalization and the burgeoning (if tacit) acceptance of the unpleasant measures needed to revitalize France’s increasingly uncompetitive and flagging economy. In contrast to her predecessors, Lagarde held the controversial view that the country’s 35-hour workweek was a symbol of indolence. She advocated a stronger work ethic, a sentiment mirrored by the French business community. Lagarde also attracted criticism for her handling of a dispute concerning Bernard Tapie, who claimed that the state-owned Crédit Lyonnaise had defrauded him when the lender sold his stock in Adidas in 1993. Lagarde ordered the case to arbitration in 2008, and Tapie was awarded €403 million (then valued at $524 million), a decision that caused an uproar.

In June 2011 Lagarde was appointed managing director and chairman of the board of the IMF. The following month she officially replaced Dominique Strauss-Kahn, who had resigned in May. Among the major issues she faced was the ongoing Greek debt crisis, which she argued could only be resolved by meaningful debt relief, an unpopular stance with some. In 2016 Lagarde was elected to a second term at the IMF. Later that year she went on trial for her actions regarding the Tapie case, which had attracted further controversy after a French court struck down the arbitral award in 2015. Lagarde was accused of negligence—notably, she failed to appeal the arbitration’s decision—and in December 2016 was found guilty. However, no jail time was ordered. In September 2019 she left the IMF, and in November she assumed the presidency of the European Central Bank.