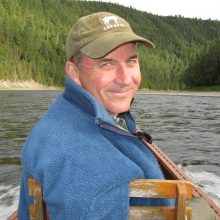 Carter Roberts is president and CEO of World Wildlife Fund in the United States, which oversees WWF’s work in the United States and in 15 countries in Latin America, Asia, and Africa. Roberts leads WWF-US in creating initiatives that combine science, government policy, blended finance, corporate commitments, sustainable supply chains, and the wisdom and rights of communities to build climate resilience, reduce our footprint, and protect the natural resources upon which all life depends.

Under his leadership, WWF has built strategies and partnerships to scale up the production of sustainable food and renewable energy; double the population of tigers; shut down global ivory markets; and protect singular ecosystems such as the Amazon, the Himalayas, the Okavango Delta, the Arctic, the Eastern Tropical Pacific, and coral reefs of the Pacific Ocean. Roberts serves on the boards of the Nicholas Institute for Environmental Policy at Duke University, and the Grantham Institute for Climate Change at Imperial College and the London School of Economics.

He is a member of the Council on Foreign Relations and recently served on the International Finance Corporation’s Advisory Panel on Sustainability and Business and the Sustainable Energy for All (SEforALL) Advisory Board. Roberts holds an MBA from Harvard Business School and a BA from Princeton University. He loves climbing, skiing, and has learned the songs of all the bird species of North America.