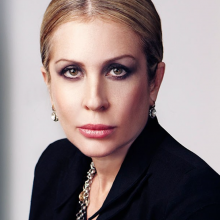 Pioneer luxury fashion entrepreneur, early backer of e-commerce, and humanitarian Carmen Busquets’s work has always been a platform for supporting craftsmanship, heritage and technology, and has thrived as a ‘laboratory’ of disruptive ideas that continue to generate.

Since Carmen’s entry into the industry in 1992, approximately 10,000 jobs have been created from her investments. The current portfolio of investments and causes upholds the philosophies, vision and principles that have motivated Carmen as an investor, mentor and entrepreneur. It is an umbrella company and communication platform that supports luxury fashion, craftsmanship, and creative entrepreneurship in the form of e-commerce businesses and venture capital funds that focus on a similar philosophy of disruptive ideas.

Carmen is a creative, strategic, intuitive investor and entrepreneur, as well as a humanitarian that focuses on disruptive ideas and innovative products and technology. Her desire has always been to discover and support the world’s top emerging entrepreneurs and to help educate consumers about their stories and products. Carmen’s role and mission as an independent female investor is different than that of larger institutional entities. Her motivation has consistently been to fearlessly experiment with her own ideas and take wholehearted personal economic risks towards them.

This is what spurred the launch of CoutureLab as a boutique, e-commerce and content site that was live for 9 years. It gave her the opportunity to provide her loyal customers with access to the benefit of those ideas and experiments. Simultaneously, she sought to provide her customers with the best of everything through pop-up stores and bespoke shopping experiences. Eventually, her holdings and portfolio of niche e-commerce ideas grew so much that she had to give up her store and personal initiatives in order to scale wider.

Carmen wants to see a future where the consumer can buy more intelligently and the value of owning things takes on more individual meaning. She also wants to help the new economy in any small way that she can, either through giving her time and mentoring founders or investing in their companies.

To achieve all these objectives, Carmen first began to back creative entrepreneurs and invest in ideas that aligned with her personal approach and vision.

After setting up a fashion boutique in Caracas named Cabus in 1990, a rocky political situation and Hugo Chavez’ military coup in 1992 prompted her to branch out internationally. Attending fashion shows in Paris, Milan and New York, Carmen would send drawings pictures of the looks via DHL to her global network of friends and clients and pre-sell clothes following the presentations.

Following the success of this idea, in 1997 Carmen started to invest in leading publicly traded internet companies. With limited capital, she invested in them despite the fact that they were trading at high multiples because she believed deeply in the sector. Upon watching the incredibly rapid growth of these companies and the excellent return on her capital, Carmen was motivated to seek to invest more directly in her own small portfolio of internet start-ups. At first, her direct investments focused primarily in the sector of wellbeing and spirituality, but then she began actively looking for a partner to take her physical store online since she was convinced the future would merge retail and e-commerce.

In 1999, she finally found the perfect partner in Natalie Massenet. The fusion of Carmen’s commercial experience and Natalie’s editorial expertise resulted in the revolutionary retail idea that Carmen sensed was imminent. This fateful meeting led to Carmen becoming the lead investor in Net-a-Porter, where a total investment of £13 million pounds from her and other investors grew to an approximate value of £1.5 billion today (read more on this from WWD here). Out of all the reported capital “invested” into Net-a-Porter that has been in the press over the last 15 years, only this early capital of £13 million went into the business – the rest was for cashing out investors and management. While difficult to replicate such a track record, Carmen remains focused on finding other extraordinary entrepreneurs where her capital and experience can help turbo-charge their growth.

In her subsequent investments she has backed other entrepreneurs including Imran Amed of the Business of Fashion, Lauren Santo Domingo of Moda Operandi, Chris Morton of Lyst, Frederic Court of Felix Capital, Chad Byers and Seth Berman of Susa Ventures, Michelle Goad of PS Dept, Alexandra Wilkis Wilson of Glamsquad, and Jose Neves of Farfetch. While some of these investments are still active, her initial capital has multiplied given the most recent valuation rounds in all of these companies.

Carmen believes that if founders have a unique idea that they are passionate about, and their vision is integral to their lives, they can create brilliantly successful companies. As long as they do it at the right time, and with the right team and investors. Sometimes, all of these elements don’t come together, but for her, the important thing is to inspire people to take a risk and try. Carmen considers it a way of paying forward, because although she isn’t always compensated for her investments, she contributes to the longevity of an idea and the career paths of the team so that one day in the future, the elements can align.

After 20 years of supporting start-ups, Carmen believes that good disruptive ideas never die. Even if the experiment fails, the idea does not, nor does the lesson. Carmen feels the psychological and business lessons are so invaluable, that no energy is wasted. The passion-fuelled long hours and hard work carried out by the teams are also always somehow rewarded.

Carmen has increasingly focused her efforts on charitable causes and educational initiatives, collaborating with a host of global bodies, world leaders and nonprofit organizations. Among these are the WWF, the Bhutanese government and Royal Family, the Bhuatn Nuns’ Foundation, Latin American-focused non-profits PACUNAM and Glasswing, sustainability consultancy to Eco-Age, the Oslo Freedom Forum, the charitable app Elbi founded by Natalia Vodianova.

The period spent connecting on these initiatives has led to a series of notable achievements. With the WWF and the Royal Government of Bhutan, as well as a number of passionate environmentalists including Leonardo DiCaprio, Carmen was a part of the ‘Bhutan For Life’ initiative – the greatest conservation story of our time. Placed right at the heart of the Eastern Himalayas, Bhutan is one of the world’s 10 most biodiverse regions, and this innovative financing project, which secured $43 million, will safeguard 5 million acres of protected land and wildlife over a span of 14 years. Most importantly, the projects will educate local communities on how to preserve their land and sustain themselves, paying forward to the next generation through this transfer of knowledge.

The political unrest and human rights violations in Venezuela, which began in 2017, has been particularly unsettling for Carmen who had to flee her country when Hugo Chavez took to power in the late ‘90s. One specific case that touched her deeply, saw the unlawful arrest of young violinist Willy Arteaga, who famously played his violin as a fight against oppression during the protests, and became a national symbol of resistance. Arteaga was arrested while playing the violin during a protest in Caracas and taken to a military prison. Carmen worked with the Oslo Freedom Forum on funding, and donated to help release him on parole, then invited him to New York to speak at the forum and implemented a funding program to help him resettle and continue his music studies. Carmen continues to donate to a number of initiatives to free Venezuela from current oppression and send aid to the Venezuelan people in the interim.

As part of her work with Glasswing International, a non-profit that is present in Latin America and now, NYC, Carmen has traveled to El Salvador and Guatemala to take part in mentoring children via the youth development programs led by Glasswing. Carmen serves on the board and has generously supported the organization in order for them to expand into the U.S. for the first time in 2018. She continues to work with the nonprofit in aims of empowering at-risk Latin American youth.