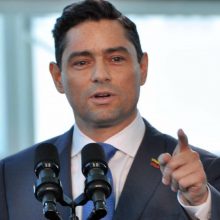 Ambassador to the United States, Bolivarian Republic of Venezuela

In February 2019, Acting President Juan Guaidó appointed lawyer Carlos Vecchio as Ambassador of the Bolivarian Republic of Venezuela to the United States, with the endorsement of the National Assembly. During the ceremony of acceptance of diplomatic credentials, held on April 8, 2019, President Donald Trump said that Carlos Vecchio was “the first Venezuelan Ambassador to the United States in 8 years and his appointment occurs at a historic moment in the that President Guaidó has courageously set a route for Venezuelans. ”

Carlos Vecchio is a lawyer graduated from the Central University of Venezuela, with a postgraduate in Tax Law in the same house of higher studies. He has a Master’s degree in Public Administration from the Kennedy School of Harvard University. Thanks to his high academic performance, he received the Fullbright Scholarship and obtained a Master of Laws from Georgetown University in Washington DC In 2013 he obtained the title of the Maurice R. Greenberg World Fellow Program of Yale University.

In June 2014, he went into exile in the United States, after on February 17 of that year the regime of Nicolás Maduro issued an infamous arrest warrant against him, for his fight alongside Leopoldo López against the dictatorship. Before leaving for exile Carlos Vecchio remained in hiding for 108 days.

From exile he became one of the main spokesmen and international actors for the restoration of democracy in Venezuela and against the regime of Nicolás Maduro. His work was focused on denouncing the serious humanitarian situation and violation of fundamental rights in his country, holding international meetings and meetings of the highest level, while dedicating himself to organizing and mobilizing the Venezuelan diaspora in favor of the struggle for freedom of Venezuela. Their effort and commitment during these years has been a key factor in the recognition and support of the international community to the struggle that the Venezuelan people are fighting to restore democracy in the country, in the pressure that the international community has established against the usurper regime. In Venezuela,

Carlos Vecchio is co-founder of the Voluntad Popular political party, together with Leopoldo López and Juan Guaidó, in which he has served as National Political Coordinator since he was elected in 2010. Under his political coordination, Popular Will has become a symbol of struggle for Political and social rights in Venezuela. He has been coordinator in the presidential campaigns of opposition candidates Henrique Capriles Radonski and Leopoldo López. He was a candidate for the National Assembly of Venezuela in the elementary of the Bureau of the Democratic Unit of 2010 and a candidate for mayor of Chacao in 2008. At times of necessary unity for the country, his resignation from the candidacy reflected his attitude sobering full and deeply democratic,

Through the Civil Association “Active Citizenship”, which he founded in 2002, Vecchio has been a human rights activist from where he assumed the promotion and defense of the human, political and civil rights of all citizens, as well as the preservation and the restitution of democratic principles and values ​​in Venezuela.

Carlos Vecchio was born on June 6, 1969 in the city of Caripe, in the eastern state of Monagas. As His Excellency Ambassador of the Bolivarian Republic of Venezuela to the United States, he has played a key role in converting the humanitarian and libertarian cause of Venezuela into a bipartisan struggle, achieving concrete results against the usurper regime and moving towards the definitive cessation of the dictatorship in Venezuela.