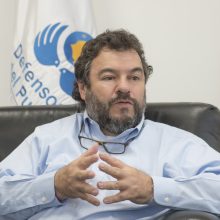 Carlos Alfonso Negret Mosquera He is a lawyer of the Faculty of Legal Sciences of the Pontificia Universidad Javeriana in Bogotá, and a Specialist in International Human Rights Law of the Alfonso X El Sabio University in Spain.

His working life began very young, in 1981, when he joined the Caja de Credito Agrario, Industrial y Minero SA as a file and correspondence assistant, messenger and reception assistant.
The academic preparation and the acute sense of leadership and social service allowed him to reach the Colombian Institute of Agrarian Reform (INCORA) where he served as Deputy General Manager of Public Establishment.

The knowledge acquired through these responsibilities and his entrepreneurial capacity to form his own firm, also took him to other instances in the private sector, highlighting his career as Secretary General of Banco Colpatria.

He was a member of the Disciplinary Jurisdictional Chamber of the Superior Council of the Judiciary, Consul General of Colombia in Chicago (United States), advisor to important institutions such as the ICBF, the Invías and the Comptroller General of the Republic, and most recently he held the position of Secretary General in the U Party.