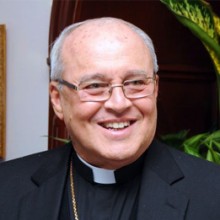 As Havana archbishop for over two decades, Ortega oversaw the visits of three popes to the island and the slow rebuilding of the church, which lost much of its influence after Fidel Castro took power.
Following Castro’s 1959 revolution, Ortega, then a young priest, was jailed in a government work camp for suspected opponents.

Decades later, Ortega hand-delivered secret messages from Pope Francis to Barack Obama and Raul Castro that urged the leaders to put aside Cold War-era mistrust and forge a new relationship between the United States and Cuba.

On December 17, 2014, the day Obama and Castro announced the deal that led to prisoner exchanges and negotiations to restore full diplomatic relations, Francis publicly thanked Ortega for his role in the breakthrough.

Ortega greeted Obama at Havana’s Cathedral on the first day of the President’s visit to Cuba in March. Obama was the first U.S. president to visit Cuba in nearly 90 years.

Often criticized for not openly challenging the government over human rights abuses, Ortega said he found engaging Cuban officials through behind-the-scenes lobbying and diplomacy to be more effective.