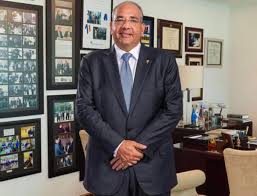 Camilo Atala is the chairman of the board of directors of Grupo Financiero Ficohsa (GFF), a financial group comprised of banks, insurance companies, pension funds, and a currency exchange agency with presence in Honduras, Panama, Guatemala, Nicaragua, and the United States of America.

Atala began his career as a businessman and entrepreneur in Honduras in 1990, when he founded the Honduran Commercial Financial. In July 1994, he led the transformation of the financial to a commercial bank, currently Banco Ficohsa. GFF is the largest financial group in Honduras, and Ficohsa is one of the most important brands in the Central American region.

Atala is a recognized leading entrepreneur who is committed to promoting sustainable economic and social development of the Central American region. Among other things, Atala has various leadership positions: president of the Honduran Foundation for National Identity, member of the board of directors of INCAE Business School, and chairman of the board of directors of Hondufuturo. Atala was also president of the Business Council of Latin America (CEAL) from 2016 to 2018. He holds a degree in Business Administration from Texas Tech University in Lubbock, Texas.