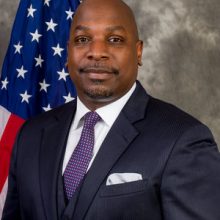 C.D. Glin is the President and CEO of the U.S. African Development Foundation (USADF) since September 2016. Prior to joining USADF, from 2011-2016 Glin was based in Nairobi, Kenya as the Associate Director for Africa for the Rockefeller Foundation, and previously served as a White House appointee at the U.S. Peace Corps as the first Director of Intergovernmental Affairs and Global Partnerships.

Glin was Vice President for Business Development at PYXERA Global where he managed international business advisory and corporate responsibility programs for Fortune500 companies and earlier consulted for the State Department, USAID and the World Bank while living in Ghana and Nigeria. He served as volunteer in the first Peace Corps South Africa group during the Presidency of Nelson Mandela. Glin holds a B.A. in Political Science from Howard University; a Master’s Certificate in Business Management from Tulane University and Postgraduate Diploma in Strategy and Innovation from Oxford University’s Saïd Business School. He was a term member of the Council on Foreign Relations and in 2011, was designated by the White House as a “Champion of Change” for his commitment and contributions to international service and civic participation.