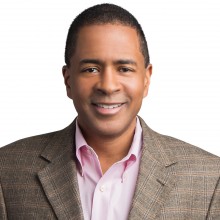 Byron was inspired by a diverse set of experiences to conceive and co-found Opportunity@Work. From his large extended family to a diverse range of friends in his “hometowns” of Detroit, Michigan and Phoenix, Arizona, he knows so many people who found themselves stuck, unable to contribute their full talents, nor to be rewarded for them. As an economist, he sees this waste of talent as a classic market failure. From his extensive work advising businesses, he knows the internal processes, constraints and risk aversion that shape employer behavior. In his public service, he has seen both the catalytic possibilities and the significant limits of workforce policy solutions. He has seen heroic non-profit efforts achieve inclusion but fall short of scale. Byron has never met a Mayor or Governor of either party who doesn’t want to bring good jobs to her or his community, and is struck by the massive and inclusive economic benefits of re-wiring the labor market.

Prior to co-founding Opportunity@Work, Byron served for 2 years in the White House as Deputy Assistant to the President for Economic Policy and Deputy Director of the National Economic Council, where his policy portfolio included job creation and labor markets, skills and workforce policies, innovation, investment, infrastructure, transportation and goods movement.

Until 2013, Byron was a senior partner at McKinsey & Company in Washington DC and in Los Angeles, where he was elected Principal in 1999 and Director in 2005.  Over 20 years at McKinsey, he worked primarily in the fields of technology & communications, information & media, services-based businesses, education, economic development, and innovation, leading McKinsey’s High Tech Services sector from 2002 to 2006, and its global Social Sector from 2007 to 2012.  He was also co-author of several McKinsey Global Institute reports, including Changing the Fortunes of America’s Workforce (2009), Growth and Renewal in the United States: Retooling America’s Economic Engine (2011), and An Economy That Works: Job Creation and America’s Future (2011), and Help Wanted: the Future of Work in Advanced Economies (2012). His professional experience prior to McKinsey was as an economist at LMC International, Oxford University, and the African Development Bank. He is the author of The Economics of International Payments Unions and Clearinghouses (MacMillan Press, 1995).

Until his appointment at the White House, Byron was active in a number of not-for-profit organizations, serving as board chairman of Hope Street Group, and as a member of the boards of trustees of The William and Flora Hewlett Foundation and Yale University.  He is a member of the Council on Foreign Relations and the Pacific Council on International Policy.