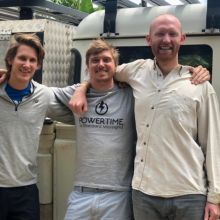 Brian graduated Summa Cum Laude in 2008 from UC Berkeley with a major in Business Administration and Minor in Energy and Resources. Brian has worked in various African countries since 2007 when he founded the international volunteer organization Volunteer Alliance. Since founding Standard Microgrid in 2013 he has worked on renewable energy projects in Kenya, Tanzania, Zambia, Botswana, Namibia, South Africa, Seychelles, DRC, Maldives and St.Lucia. Brian also founded the non-profit organization Solar Head of State after completing a solar energy installation on the Executive Residence of the Maldives as part of a campaign he led to put solar on the White House. After completion of the campaign Brian worked with the US General Services Administration on a plan to install 18kW of solar PV on the White House (though the system was later down-sized). Since moving to Zambia in January 2013, Brian has devoted himself to understanding the socio-economic dynamics and energy consumption patterns of rural African villages. After two years of on the ground research, Brian developed the concept for the Standard Microgrid off-grid microgrid utility. He currently manages the Standard Microgrid Group’s efforts of rolling out solutions to a pipeline of over 170 communities.