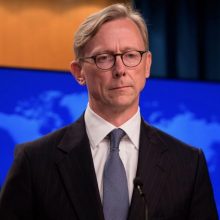 Brian Hook is the Former U.S. Special Representative for Iran and Senior Policy Advisor to the Secretary of State. Prior to this appointment, he served as Director of the Policy Planning Staff from 2017-2018.

From 2009-2017, he managed an international strategic consulting firm based in Washington, DC. He held a number of senior positions in the Bush Administration, including Assistant Secretary of State for International Organizations; Senior Advisor to the U.S. Ambassador to the United Nations; Special Assistant to the President for Policy in the White House Chief of Staff’s office; and Counsel, Office of Legal Policy, at the Justice Department.

He practiced corporate law at Hogan & Hartson in Washington from 1999-2003. Before practicing law, he served as an advisor to Iowa Governor Terry Branstad and to U.S. Congressman James Leach.