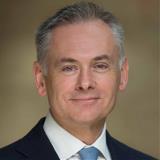 Brad Staples is CEO of APCO Worldwide, where he leads the firm’s 34 offices across 21 countries. Mr. Staples has developed public affairs and reputation campaigns for numerous corporations, governments, and political leaders. He joined APCO in 1996 to lead its European business from Brussels and built the firm’s global antitrust practice, before leading the EMEA region and serving as President, International. Prior to joining APCO, Mr. Staples worked in a consultancy in London and was managing director of an EU affairs consultancy in Brussels. He holds a BA in politics and government and speaks French and Italian.