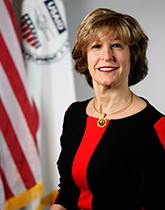 Bonnie Glick serves as Deputy Administrator of the US Agency for International Development. Ms. Glick was most recently the Deputy Secretary of the Maryland State Department of Aging, where she was appointed by Governor Larry Hogan. Before joining the Hogan Administration, she worked in the non-profit world as a Senior Vice President at Meridian International Center. Prior to that, she worked for IBM in a variety of positions, which ranged from Account Executive in the Global Business Services Division to Business Development Executive in IBM’s Research Division.

Ms. Glick began her career as a Foreign Service Officer in the Department of State, where she served tours of duty at the U.S. Mission to the United Nations during Operation Desert Shield; at the U.S. Embassy in Addis Ababa, Ethiopia; and at the U.S. Embassy in Managua, Nicaragua. From Nicaragua, she returned to Washington, D.C., to serve on the staff of the Secretary of State’s Operations Center, followed by two years as a Senior Officer in the White House Situation Room, and then in the State Department’s Bureau of Western Hemisphere Affairs.

Ms. Glick holds a B.A. in Government/International Relations from Cornell University, an M.A. in International Affairs from Columbia University, and an M.B.A. from the Robert H. Smith School of Business at the University of Maryland. She speaks Spanish, Portuguese, Hebrew, Amharic, French, and Russian.