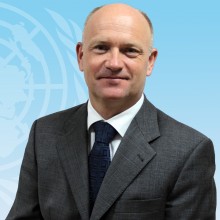 Mr. Mathiasen has over 25 years of experience in drug control and crime prevention. He has worked at the headquarters of UNODC in Vienna and UNODC representative offices in positions of progressive responsibility.

From September 2012 assumed functions as Representative of the United Nations Office on Drugs and Crime (UNODC) in Colombia.