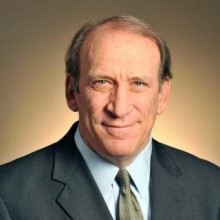 Blair Levin is a nonresident senior fellow with the Metropolitan Policy Program. He serves as the executive director of Gig.U: The Next Generation Network Innovation Project, an initiative of three dozen leading research university communities seeking to support educational and economic development by accelerating the deployment of next generation networks. He also serves as an advisor to a variety of non-profits with a mission of deploying or using broadband technology to advance social progress, including Case Commons,Volo and the LEAD Commission. Levin also advises both privately held and public companies in the telecom and technology sectors.

Previously, he worked with the Communications & Society Program with the Aspen Institute Communications and Society Program, following his departure in 2010 from the Federal Communications Commission where he oversaw the development of a National Broadband Plan. Levin rejoined the Commission in 2009, after eight years as an analyst at Legg Mason and Stifel Nicolaus. As Barron’s magazine noted, Levin “has always been on top of developing trends and policy shifts in media and telecommunications … and has proved visionary in getting out in front of many of today’s headline making events.”

Levin served as chief of staff to FCC Chairman Reed Hundt from December 1993 through October 1997. During that period he oversaw, among other matters, the implementation of the 1996 Telecommunications Reform Act, the first spectrum auctions, the development of digital television standards and the commission’s Internet initiative.

Prior to his position with the FCC, Levin was a partner in the North Carolina law firm of Parker, Poe, Adams and Bernstein, where he represented new communications ventures, as well as numerous local governments on public financing issues. He is a graduate of Yale College and Yale Law School.