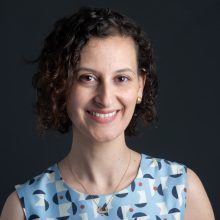 Bitta is a long time immigrant rights advocate and human rights organizer. After graduating law school from DePaul University in Chicago she practiced civil rights law with a particular focus on the discriminatory impact of immigration practices on Muslim or Middle Eastern immigrants. Shortly thereafter she joined Safe Horizon and continued her legal practice representing immigrant crime victims, asylees, and others in both affirmative and defensive petitions before the immigration court. Bitta led the organization’s advocacy work on behalf of immigrant crime victims seeking U visas, including before the City and Department of Homeland Security. Along the way Bitta has continued her community organizing, increasing awareness of global human rights injustices and the plight of refugees. Since joining the Mayor’s Office of Immigrant Affairs in 2014, Bitta has advanced the rights and well-being of immigrant New Yorkers. After spearheading the IDNYC outreach campaign, Bitta helped design the ActionNYC legal services program and was promoted to Assistant Commissioner of MOIA in January of 2016. In May of 2018, Mayor de Blasio appointed Bitta to Commissioner of the Mayor’s Office of Immigrant Affairs.