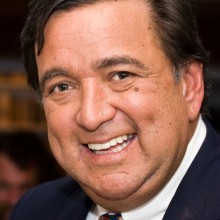 In 2008, he sought the Democratic nomination for President, dropping out after Iowa and New Hampshire. As a diplomat and Special Envoy, Richardson has received four Nobel Peace Prize nominations, and has successfully won the release of hostages and American servicemen in North Korea, Cuba, Iraq and the Sudan.

Since entering life as a private citizen in 2011, he has authored three books including “How to Sweet-Talk a Shark: Strategies and Stories from a Master Negotiator,” which was published in fall 2013. He is active on the national and international speech circuit and appears frequently on numerous television news programs, ranging from CNN to FOX, Univision, Meet the Press, and This Week with George Stephanopoulos. Richardson has also served as a Special Envoy to the Organization of American States (OAS) and as a Special Fellow on Latin America at the James A. Baker III Institute for Public Policy at Rice University. Richardson also sits on several nonprofit boards, including the World Resources Institute (WRI), Refugees International, and the National Council for Science and the Environment (NCSE). In addition, he serves on numerous for-profit boards, primarily in the renewable energy space, such as Abengoa International.

Richardson has also started two foundations: The Richardson Center for Global Engagement, focusing on conflict resolution and prisoner release, and the Foundation to Preserve New Mexico Wildlife with actor and conservationist Robert Redford, which has led the charge to protect wild horses and provide alternatives to horse slaughter. Recently, the Richardson Center for Global Engagement played an instrumental role in the successful release of Marine Sgt. Andrew Tahmooressi from prison in Tijuana, Mexico.

Before being elected Governor of New Mexico, Richardson was Chairman of Freedom House, a private nonpartisan organization that promotes democracy and human rights worldwide, and served on the boards of the National Resource Defense Council and United Way International. He has been an adjunct professor at the John F. Kennedy School of Government at Harvard, and has received several honorary degrees from institutions of higher learning that include Tufts University and the University of New Mexico. As Governor, he taught courses at the University of New Mexico and New Mexico State University; this year, he will teach courses at the Fletcher School of Law & Diplomacy and Columbia University. More recently, he was given the National Hispanic Hero Award by the U.S. Hispanic Leadership Institute.

During his administration, more than $1 billion was invested in public schools, including professional salaries to recruit and retain quality teachers. He also shifted education money away from the administration and into the classroom, and increased access to early childhood education. In 2010, he was named the “best education Governor” by the National Education Administration.

Few can match Bill Richardson’s wide-ranging experience and dedication to protecting and improving human rights, and improving the quality of life for the people of New Mexico, the United States and the world.

Richardson has been married to his high-school sweetheart, Barbara, for 43 years. He received a BA from Tufts in 1970 and an MA from Tuft’s Fletcher School of Law & Diplomacy in 1971.