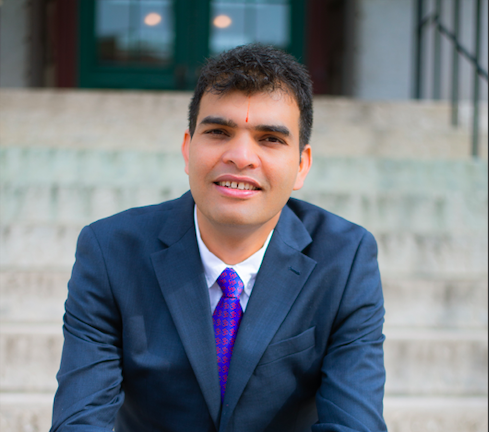 Bhuwan Pyakurel, a former refugee from Bhutan, resettled in the United States in 2009. He and his family moved to Ohio in 2014 and he became a U.S. citizen in 2015. They bought their first home in Reynoldsburg and immediately became involved in the community. Bhuwan and his wife, Dil, have been married for 14 years and they have two children, Aditi and Dev, both who attend Reynoldsburg Public Schools. Aditi loves reading and volunteers her time to raise funds to protect the environment. Dev loves sports and plays basketball and soccer, and enjoys skateboarding, karate, chess, and solving the Rubik’s Cube.

As a community leader, Bhuwan has worked with the Reynoldsburg Police Department and residents ever since he moved to the city. He believes education is the most important tool to bridge the gap and build trust between those in public safety and the community. Since 2015, Bhuwan has been a manager of interpretive services for Primary One Health, which operates 10 clinics in Central Ohio, and he also serves on the Board of the new Reynoldsburg YMCA. He has also served as President of the Bhutanese Community of Central Ohio (BCCO).

For Ward 3 residents and all of Reynoldsburg, Bhuwan’s plans include: helping keep Reynoldsburg residents safer by fixing sidewalks, roads and infrastructure and improving lighting, increasing the number of code enforcement officers in the City, boosting communications and transparency between City Council and citizens by using modern technologies, and making City government work better for the people of Reynoldsburg by
holding regular town hall forums with constituents.

Bhuwan, who has a Bachelor of Science degree from North Bengal University in India, and the City of Reynoldsburg made history in November 2019 when he became the first Bhutanese American to be elected to public office in the United States. After he and 120,000 fellow Bhutanese-Nepali’s were forcibly pushed out of Bhutan and their civil, human and political rights stripped away, Bhuwan says he will “always be grateful to this nation for giving me a second chance to live my life and enjoy these freedoms in the greatest country in the world.” Bhuwan deeply values his American citizenship and its inalienable protected rights, and he now works to “pay it forward” and create new
opportunities for the people of Reynoldsburg.