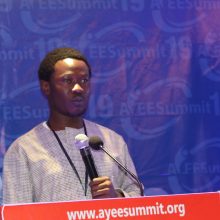 Beyan Flomo Pewee, a Liberian advocate for global education and a music executive born in the slums of Konyamah, Guinea, during a period of civil war in his country.

In 2013, Beyan formed his own youth-led education NGO, called YOCEL, dedicated to empowerment through universal education. And in 2017, launched an entertainment conglomerate called BeeVonne Empire, LLC to provide strong support system and mechanism that empowers young talents to become active citizens contributing to the growth and development of the Liberian economy.

In 2014, Beyan was awarded the UN Global Education Youth Courage Award for his courage in education leadership. He is a Young African Leaders Initiative Ambassador for West Africa, and a representative on the Education Sector Development Committee. Beyan serves as a member of the Global Learning Metrics Task Force 2.0 Working Group on Policy, Advocacy and Communication, convened by the UN Youth Advocacy Group, the Center for Universal Education, and UNESCO. In 2016, Beyan launched the Annual Youth Education & Empowerment Summit to support youth engagement and participation in education. Beyan works to inspire thousands of youth in his country and around the world.

Native Beyan, Has Travel through his Thoughts, sat in the Middle of it and Dance to Education, greeting its Memories. As Always Melted in his Vision, since Birth, Poverty has Never Drive His Passion away.

Overwhelmingly Winning the Most Enterprising Personality of the Year 2018 and the Most prominent youth advocate of the year 2019. He Currently serves as the Head of Programmes at the International Youth Coalition for Education.