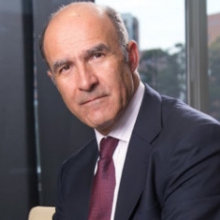 Mr. Vargas is the CEO at ISA (ww.isa.co). ISA is a leading multi-latin company based in Medellin, Colombia, focusing on four different businesses: Electric Power Transmission; Telecoms; Road Concessions; and Management of Real Time Systems where it acts as an independent system operator for the Colombian electric power system. Founded in 1967, ISA operates through 33 affiliated companies in 9 countries in Latin America and more than USD12 billion in assets as of year end 2014.

Previously, Mr. Vargas was founding partner of Nogal Asesorias Financieras, an investment banking advisory boutique in Colombia specializing in local and cross-border M&A. During his more that fourteen years at Nogal,  Mr. Vargas led multiple transactions in sectors such as agroindustry, pharma, autoparts, paper and packaging, mining, oil and energy among others.

He has been Director at several Boards in both for profit and non for profit corporations and foundations, such as: ISA S.A. E.S.P (www.isa.co), Amarilo S.A. (www.amarilo.com) and The Pantaleon Group Inc. (www.pantaleon.com). Also Best Buddies Colombia (www.bestbuddies.com.co); Lumni Colombia (www.lumni.com.co) among others.

Before founding Nogal in 2001, Mr. Vargas was managing director at ING Barings where he headed the corporate and investment banking operations in Colombia. Mr. Vargas joined Baring Securities in 1994 as Head of Colombia and was subsequently appointed as President and CEO for the merged operations of Barings and ING Colombia on January 1997.

Previous to that he was Head of the External Financing and Foreign Reserves Department at the Colombian Central Bank (Banco de la República). In this position Mr. Vargas was responsible for managing the portfolio of Colombia’s foreign reserves.

Mr. Vargas obtained an MBA from Columbia University and an Economics BA and MS candidate from Universidad de Los Andes, in Bogotá, Colombia.