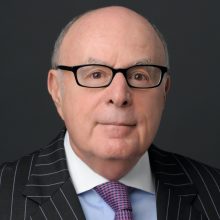 Bart, now Senior Counsel at Cahill Gordon & Reindel LLP, has been at Cahill for close to 45 years. During his tenure as a Partner, he had chaired most committees at the firm.

Bart advises the Boards of Directors of public companies, and has or is currently serving in his personal capacity on three separate public company boards, and has served and continues to serve on the boards of several non-profit institutions.

Bart graduated from Harvard Law School and served for one year on the Research Faculty of Harvard Business School. He lives in New York with his wife, Wendy A. Stein, who works in the Medieval Department of the Metropolitan Museum of Art. Wendy is on the Board of the New York Common Pantry and had served as the Chairman and Vice Chairman of that Board. They have two grown sons, Benjamin and Jacob.