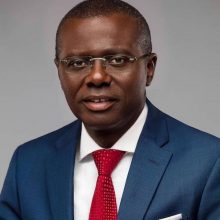 Until his emergence as the Executive Governor of Lagos State, His Excellency, Mr. Babajide Olusola Sanwo-Olu was the Managing Director/CEO of Lagos State Development Property Corporation (LSDPC). He was also a 3-time Commissioner in Lagos State, having served in the Ministries of Economic Planning & Budget, Commerce & Industry and the Ministry of Establishments, Training & Pensions.

Education
Mr. Babajide Olusola Sanwo-Olu is an alumnus of the prestigious Harvard Kennedy School of Government, London Business School and the Lagos Business School. He earned a Bachelor’s degree in Surveying & Geo-Informatics and a Master of Business Administration (MBA) from the University of Lagos.

Private Sector Experience
Mr. Babajide Olusola Sanwo-Olu was a Treasurer at former Lead Merchant Bank from 1994 to 1997 before moving to the United Bank for Africa (UBA) as the Head of Foreign Money Market. He subsequently moved to First Inland Bank, Plc (now First City Monument Bank, from where he retired as a Deputy General Manager and Divisional Head.

His meritorious service to Lagos State continued when he was appointed as the Managing Director/CEO of the Lagos State Development Property Corporation (LSDPC) in 2016.

His Excellency, Mr. Babajide Sanwo-Olu assumed Office as the 15th Governor of Lagos State on 29th May 2019.