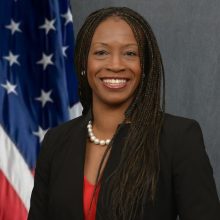 Ms. Aurelia S. Giacometto is the General Counsel and co-founder of AVC Global. AVC Global is a premier logistics company that works with National governments to secure their pharmaceutical supply chains. Aurelia has extensive experience in regulatory compliance in various fields of agriculture, environmental stewardship, and the management of fish and wildlife populations. Aurelia is passionate and committed to the environment, wildlife, and sustainable development. As a biologist, she developed environmentally sustainable crops at Bayer Corporation, formerly Monsanto Company. While there, she saw the legal and regulatory hindrances of using science and new technologies to improve crop yield and self-sufficiency of African farmers, which motivated her to obtain her law degree. She served as legal counsel and regulatory affairs for Alltech’s Division of Crop Science, where she guided the business team and research and development work for products that increased soil health.

In 2017, she entered government service as the Deputy Assistant Secretary in the Department of the Interior, where she forged relationships with other federal agencies and many organizations to implement policies that gave the American public more access to federal lands and programs. In 2019, she was confirmed by the U.S. Senate as the 22nd Director of the U.S. Fish and Wildlife Service. She led the 8500-employee agency with over 850 million acres of land and water. She revolutionized the business operations and relied on the best available science to protect our Nation’s fish and wildlife populations and their habitats.

She received her Bachelor’s degree from Howard University, a Master’s degree from Purdue University, and a law degree from the University of Kentucky J. David Rosenberg College of Law. Aurelia serves on several boards, including Ramaco Resources, a publicly-traded metallurgical coal company, the Steamboat Institute, and the Foundation of Sanford Underground Research Facility. She is an Advisory Council Member of the Rubicon Institute and Protect the Harvest. In her spare time, you will find her operating her thriving real estate rental business in Missouri and Indiana or outdoors fishing, hunting, or running. By the way, she holds a sub-3-hour marathon time.