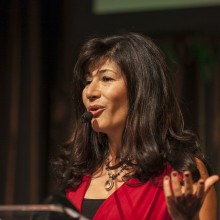 Atossa Soltani is the Founder and President of Amazon Watch, a nonprofit organization founded in 1996 to protect the rainforest and advance the rights of indigenous peoples of the Amazon Basin. Atossa served as Amazon Watch’s first Executive Director for 18 years and continues to support the organization’s mission. Currently Atossa is leading the development of an Amazon Watch and Pachamama Alliance joint-initiative to secure permanent protection for the most biodiverse rainforest in the world, a vast region on the Ecuador-Peru border in the headwaters of the Amazon River.

Atossa is also the midst of producing a feature-length documentary called The Flow, about the art of aligning with nature’s way. Passionate about effective philanthropy focused on the world’s indigenous peoples, for nearly a decade Atossa has been serving as a Trustee of the Christensen Fund, a private San Francisco-based foundation that backs the stewards of biocultural diversity, and was as the Foundation’s board chair for five years (2012-2016).

For the past 27 years, Atossa has been leading global campaigns that have resulted in groundbreaking victories for rainforest protection, indigenous land rights, and corporate accountability. A skilled strategist and storyteller, Soltani has brought to light human rights abuses and environmental disasters caused by extractive industries and effectively advanced rights based solutions to these conflicts.

Prior to founding Amazon Watch, Atossa directed campaigns at the Rainforest Action Network that lead to ending clear-cut logging practices in Canada and forcing Hollywood Studios to end their use of rainforest wood in movie sets.

A native of Iran, Atossa moved to the U.S. during that country’s revolution. Atossa holds a B.S. in Public Policy Management from the University of Akron, Ohio. She is fluent in Spanish and Farsi and conversational in Portuguese.