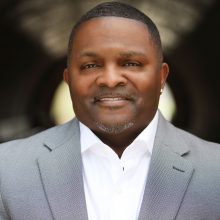 Born and raised in Brooklyn, New York, Andre T. Mitchell made history in June of 2022, when appointed by Mayor Eric Adams, as the first New York City Gun Violence Prevention Czar and Co-Chair of the Gun Violence Prevention Task Force. Mitchell is the Founder and Chief Executive Officer of Man Up! Inc. USA (MUSA), the most recognized Cure Violence organization in NYC, and the first to receive site certification by Cure Violence Global. MUSA is a comprehensive multi-cultural, social service agency that provides violence prevention/intervention; youth services; employment training; and other family-related services that encourage community empowerment. MUSA is dedicated to building healthy and safe neighborhoods with the infusion of local credible messengers.

Mitchell, a well-known and respected community activist, and leader started Man Up! Inc. in 2004 as a response to the killing of 8-year-old Daesean (Dae Dae) Hill. Young Dae Dae was fatally struck by a stray bullet in East New York, as he walked home on November 17, 2003, with his stepfather and younger siblings. Prior to founding the organization, Mitchell worked for over 15 years in various non-profits like Directions for Our Youth and Imani Altisimo Inc., elevating to the rank of directorship. He then transitioned into city government, becoming the Chief of Staff to NYC Council Member, Charles Barron. MUSA and Mitchell’s recent appointment as New York City’s Gun Violence Prevention Czar, represents a capstone of his thirty plus year career in public service, and a testament to transformation, since his release from prison in 1991.

​In 2009, MUSA became one of the first organizations in the State of New York, to adopt and implement “Cure Violence”, the Chicago based violence intervention and reduction model. Currently, Cure Violence is recognized as an integral part of evidence-based violence reduction in NYC and other urban communities across the globe. Mitchell was subsequently credited as the co-architect of the NYC Crisis Management System (CMS), a systematic and comprehensive wrap-around service model created to reduce gun violence, established in 2010.

​In a comprehensive evaluation of the organization, CUNY’s John Jay College of Criminal Justice Research and Evaluation Center (JohnJayREC), found MUSA to be the best replicator of the Cure Violence model in New York City. In a later in-depth study, John Jay published that MUI was responsible for a 50% decrease in gun injuries in East New York and further noted that “the explanatory power of Cure Violence on attitudes was strong.” The Research Center also attributed a steep decline in “the willingness of respondents to use violence in resolving disputes” directly to MUI.

​For almost twenty years Mitchell civically served as an appointed member of Brooklyn, Community Board 5. In 2014, Mitchell was elected as the youngest Chairperson of the East New York planning board, proudly serving the same neighborhood where he and his seven siblings were raised by his mother in public housing.

​Mitchell has earned credentials from Cornell University and the University of Connecticut, in Family Development and Leadership (FDC & FDLC). He is also certified as an International Cure Violence Implementation Specialist and Trainer, National Gang Specialist, Recovery Coach, Restorative Justice Circle Keeper, and member of the National Anger Management Association.

​As a result of his important impact and continued service to the community, Mitchell has been called upon to spearhead and organize hundreds of rallies, protests, and calls for social and criminal justice reform. As a community development and violence prevention strategist, Mitchell has been in demand to consult other grass-root and non-profit organizations, in cities across the country, to help build capacity and support development.