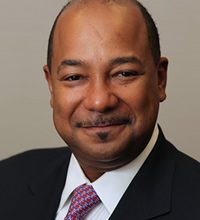 Anthony Lewis is Region Vice President of State Public Policy and Government Affairs for Verizon. He oversees the corporations’ interests in New York, New Jersey, Connecticut, Pennsylvania, Delaware, the District of Columbia, Maryland and Virginia. Mr. Lewis assumed this position in October 2011 and his responsibilities include shaping and advancing Verizon’s public policy initiatives for the wireline, wireless and enterprise business segments. He also directs Verizon’s philanthropic activities for the region.

Prior to this position Mr. Lewis served as vice president of Wholesale Development and Operations for Verizon Wireless. He was responsible for executing the open development initiative which included directing the pricing, activation, billing, distribution, device specification, testing, communications planning and financial matters for the business. He joined the Chesapeake and Potomac Telephone Company of Virginia, now Verizon Virginia, in 1986 as a group manager in the operator services department and has held a succession of positions with increasing responsibilities in product line management, traffic engineering and planning, sales, regulatory, public policy and marketing.

Mr. Lewis serves on various boards including Fight for Children, the Alvin Ailey American Dance Theater, Johns Hopkins University Cary School of Business and KIPP DC (a network of high-performing, public, college-preparatory charter schools which serves under-resourced communities in Washington DC). Mr. Lewis is the Chairman of the Board of Directors of the Nationals Youth Baseball Academy and the former chairman of the board of directors of the Greater Washington Board of Trade. Mr. Lewis graduated from Elizabeth City State University with a Bachelor of Arts degree in business in 1986. He furthered his education at the University of Pennsylvania’s Wharton School of Business in their Leadership Development Program and the Johns Hopkins Leadership Development Program in 1996. He obtained his MBA from the Johns Hopkins University in 2000.