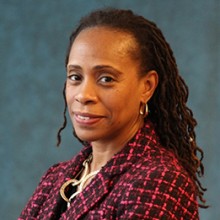 Anne Williams-Isom is Chief Executive Officer of the Harlem Children’s Zone® (HCZ), a pioneering leader in education, community development, and the fight against poverty. Renowned worldwide for its commitment to addressing the needs of the individual child on an unprecedented scale, HCZ currently serves over 12,000 youth and their families in Central Harlem through its comprehensive cradle-through-college pipeline of best practice programs.

Before becoming CEO in July 2014, Ms. Williams-Isom served for nearly five years as HCZ’s Chief Operating Officer, leading HCZ’s 2,100 staff, overseeing all HCZ programs, and further strengthening the organization’s strategic use of data to improve student outcomes. Prior to joining HCZ, she worked in leadership at New York City’s Administration for Children’s Services (ACS) for 13 years, concluding her tenure as Deputy Commissioner of the Division of Community and Government Affairs. While at ACS, she instituted and oversaw the implementation of a number of innovative initiatives, including the first ever ACS Leadership Academy for Child Protection, a program designed to help the 160 ACS Child Protective Managers lead the 3,800 frontline staff responsible for investigating the 55,000 reports of child abuse and neglect each year. In addition, during the creation of the original HCZ Project in the 1990s, Ms. Williams-Isom provided HCZ’s then CEO and now President, Geoffrey Canada, with strategic counsel on integrating preventive services into HCZ’s neighborhood-based network of programs.

Ms. Williams-Isom holds a J.D. from Columbia Law School and a B.A. in political science and psychology from Fordham University. She serves on the Advisory Council of the My Brother’s Keeper Alliance, the new nonprofit organization inspired by President Obama’s My Brother’s Keeper initiative, is routinely sought after for her expert guidance on child welfare and community development, and has been featured in The New York Times, Crain’s New York, The Chronicle of Philanthropy, and Essence, as well as on WABC’s Here and Now and Bloomberg EDU.