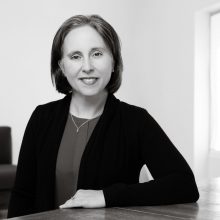 Ann O’Leary is a law partner at Jenner & Block in the Litigation Department, a Co-Chair of the firm’s Government Controversies and Public Policy Litigation Practice, and a member of the firm’s management committee. As a lawyer and crisis leader, she has worked on significant workplace, climate, energy, economic, and public health issues. She brings decades of experience in government, politics, social policy, and non-profit leadership. Prior to joining the firm in 2021, Ms. O’Leary served as Chief of Staff to the Governor of California, Gavin Newsom. Ms. O’Leary led the Governor’s office during an unprecedented time of challenge for California, including managing the worst wildfires in the state’s history, the bankruptcy of one of the major investor-owned utilities, a strained electricity grid, statewide teacher strikes, COVID-19 public health and economic response, racial riots, and the results of the climate crisis facing California. Ms. O’Leary co-chaired the Governor’s Task Force on Business and Jobs Recovery and chaired the Governor’s Strike Team on Energy and Wildfires. She also led the development and implementation of the proactive agenda of the Governor to expand opportunity and affordability in California, including notable expansions of California’s Earned Income Tax Credit and Paid Family Leave. Prior to joining the Governor’s office, Ms. O’Leary was a law partner at another major law firm, where she focused her practice on representing tech companies, philanthropies and non-profit organizations, and led numerous pro bono efforts. Earlier in her career, Ms. O’Leary served as Senior Policy Advisor to Hillary Clinton’s 2016 presidential campaign and Co-Executive Director of the Clinton-Kaine Transition Project. She was a Deputy City Attorney in San Francisco; Executive Director of UC Berkeley Law’s Center on Health, Economic, and Family Security and lecturer-in-law at UC Berkeley Law; legislative director for Senator Hillary Clinton; and a policy advisor with the White House Domestic Policy Council under President Bill Clinton.