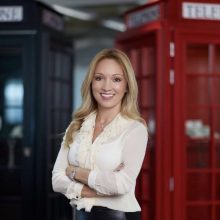 Angela Zuluaga is the Vice President for Public Affairs, Communications and Sustainability for the Latin Center Region of The Coca-Cola Company. She is responsible for internal and external communications, government relations and for shared value projects. As head of public affairs, she leads 5by20, which seeks to empower 5 million businesswomen in the Coca-Cola system by 2020, and a World Without Waste, Coca-Cola’s commitment to collect and recycle the equivalent of every bottle or can it sells globally by 2030. She was named a Woman to Watch in Colombia in 2018 by P&M Magazine and Advertising Age.

Before joining The Coca-Cola Company, Zuluaga was the Public Affairs & Market Access Direct for Baxter Laboratories, where she provided government insights and influence. In this capacity she designed, analyzed, and implemented communications plans for regulatory policy and partnerships. Zuluaga started her career as a news anchor at Fox 18 and has also worked as a college professor.