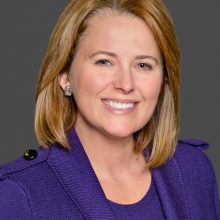 Angela Heise is President of the Civil Group at Leidos. In this capacity, she is responsible for providing solutions to U.S. Cabinet-level civil agencies and major elements of the public and private sector across the globe. Focus areas include air traffic automation, energy and the environment, federal infrastructure and logistics, IT and cybersecurity, and homeland and transportation security. Prior to this role, Heise served as vice president of Commercial Markets for Lockheed Martin-Commercial Cyber, where she was responsible for the delivery of a portfolio of cybersecurity and information technology solutions and services to commercial Global 1000 customers.

Heise holds a bachelor of science degree in computer science from Southern Illinois University Edwardsville (SIUE) and is an alumna of Harvard Business School’s Advanced Management Program. She was recently recognized as the recipient of the 2019 IT Leader Award from Temple University’s Institute for Business and Information Technology and named one of Washington Exec’s Top 10 Civil Execs to Watch in 2019. She was also named to SIUE’s Alumni Hall of Fame as well as Washington Exec’s Top 25 Executives to Watch in 2018, in what has been dubbed as The Year of the Transformational Leader. Heise was recognized in 2013 as one of Federal Computing Week’s Top 100 Executives and in 2012 as one of Aviation Week’s Top 40 Under 40.