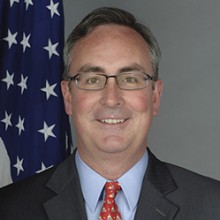 Andrew O’Brien is the Special Representative for Global Partnerships in the Secretary’s Office of Global Partnerships (S/GP). Previously, Special Representative O’Brien had served as Secretary Kerry’s Massachusetts State Director in the Senate since 2007, reprising a role he had served in from 2003 to 2005. In this position, O’Brien played a lead role in all major policy and legislative deliberations affecting Massachusetts in the United States Congress, and is particularly proud of his work with small businesses, organized labor, the LGBT community, youth, veterans groups and new immigrants on behalf of then-Senator Kerry. In the past several years, he has lectured on politics and government at the city, state and national levels. In 2007, O’Brien was named one of the city’s Ten Outstanding Young Leaders by the Boston Jaycees and in 2009 he was named one of Massachusetts’ “Top Ten Political Operatives” by Campaigns and Elections Magazine.

O’Brien is a lifelong public servant having worked in a number of positions in public life. After working on Thomas M. Menino’s successful campaign for Mayor of Boston in 1993, Drew served as a Special Assistant to the Mayor for several years and was later appointed Executive Director of the Mayor’s Office of Neighborhood Services. Later in his career at Boston City Hall, O’Brien served as a Special Assistant to the Director of the Boston Redevelopment Authority. He went on to serve as Chief of Staff to the Massachusetts State Lottery Commission, where he assisted State Treasurer Shannon O’Brien in the creation and implementation of the agency’s first-ever operating policies and procedures. And, in the academic years of 2005/2006 and 2006/2007, O’Brien served as Deputy Chancellor of the University of Massachusetts Boston.

O’Brien also worked in several capacities throughout the course of Secretary Kerry’s 2004 presidential campaign where he spent time across the country, particularly in Iowa, New Hampshire, Ohio, as well as at the Democratic National Convention in Boston.

Andrew O’Brien holds a Bachelor’s degree from the University of Massachusetts Amherst, and a Master of Public Administration degree from Northeastern University.