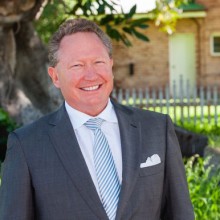 Andrew Forrest is a leading Australian philanthropist and businessman who devotes the majority of his time to improving the lives of the world’s most underprivileged people. In particular, he drives national and global initiatives including the eradication of modern slavery and the creation of parity of circumstance and opportunity for all Australians. In 2003, Andrew founded the Fortescue Metals Group (FMG), which has become one of the world’s largest iron ore companies. Businesses established by Andrew now rank in the world top five for the production of iron ore, nickel, and cobalt, fundamental materials to the world’s growth economies.

In 2011, Andrew stepped down as CEO of FMG, becoming Chairman, to focus on the philanthropic work of the Minderoo Foundation, and organization he established wth his wife Nicola in 2001 that seeks to give a hand up rather than a hand out.

In 2013, the Prime Minister of Australia appointed Andrew to chair a review into Indigenous Training and Employment, with the specific aim of ending employment disparity between indigenous and non-indigenous populations. In 2014, at the request of the Australian Government, Andrew wrote the “Creating Parity” report on indigenous challenges, which included a significant number of recommendations that are now being enacted.

One of Andrew’s proudest achievements is facilitating the coming together of the world’s major faith and spiritual leaders in the Vatican in December 2014, in New Delhi and Canberra in December 2015, and in Jakarta in March 2017 to produce a global religious proclamation against modern slavery.

In 2012, Andrew founded and now co-chairs the Australian-China Senior Business Leaders Forum and in 2014 the Australia Sino One Hundred Year Agricultural and Food Safety Partnership, working with both nations’ senior-most government and business leaders.

Andrew is the first Australasian to sign the Giving Pledge, committing to give away the overwhelming majority of his wealth. He has been awarded numerous lifetime achievement awards, including Business Leader of the Year at the Australian Institute of Management Western Australia Pinnacle Awards (2014) and an honorary doctorate by The University of Western Australia for outstanding service to the community, to his nation, and beyond. Andrew is a Councillor of the Global Citizen Commission reporting to the United Nations General Assembly. The Commission is charged with the reformation of the Universal Declaration of Human Rights. In November 2016, Andrew was named the 2017 Australian of the Year for Western Australia, and in June 2017, he was named 2017 Western Australian of the year. He is an Officer of the Order of Australia.