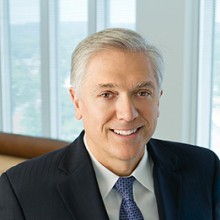 Andrés R. Gluski was named President and Chief Executive Officer of AES in September 2011, a Fortune 200 global power company with presence in 18 countries.

Mr. Gluski also worked at the International Monetary Fund and as Director General of Public Finance for the Ministry of Finance of Venezuela.

He is currently Chairman of AES Gener and Brasiliana and is a member of the Board of Waste Management.