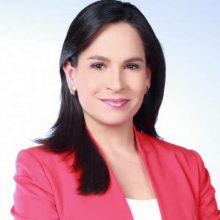 Ecuadorian journalist holding more than 20 years of experience in broadcast journalism and a Master’s degree in Political Management from the George Washington University. Andrea is the anchor of RCN Television’s primetime newscast “Noticias RCN” and recently worked at “La F.M.”, Colombia’s leading radio station, as journalist and political analyst. Andrea has also worked as a correspondent of the Ecuadorian network, Ecuavisa, in Washington, D.C. and currently holds the position of Director of Specialized shows at NTN24. She also directs her own opinion show, “Zoom a la Noticia”.

She has also featured as moderator in relevant forums and summits worldwide, including the Annual CAF Conference, the UNFPA world report and WEF summits.

For Andrea, journalism has to follow three premises: honesty, accuracy and passion. Without these values, there is no journalism. “To be honest when delivering information, with the only goal of informing the citizens. To be precise in order to avoid mistakes or harm any person’s image. One should always speak passionately and truthfully, since passion is what drives all journalists to question facts, research and be creative”.