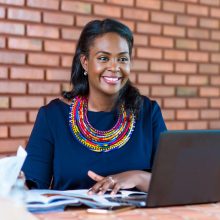 Prior this appointment, Mrs. Ndiaye was the Chief Marketing Officer for Orange Money in Senegal, a business that has grown exponentially and become profitable in the past two years. She had previously been the B2C Marketing Performance Manager, in charge of strategy, sales and margin growth, return on investment and process efficiency, customer experience and loyalty retention. She led many structuring projects within Sonatel from 2013 to 2018. This earned her the confidence of Top Management Orange Group.

Mrs. Ndiaye began her career as a strategy consultant with McKinsey & Company in France and Africa, designing strategies and operations for telecommunication and technology providers, banks, and consumer goods manufacturers in Europe and West Africa from 2009 to 2011. She also gained experience interning at Goldman Sachs in London, BNP Paribas in Geneva, and at the French Business Confederation (MEDEF) in Paris.

Originally from Senegal, Mrs Ndiaye holds a Bachelor’s degree and a Master’s degree in Management from HEC Paris Grande Ecole, coupled with an MBA from The Massachusetts Institute of Technology (MIT), Sloan School of Management, during which she was appointed President of the Africa Business Club.

She is also married with two lovely kids