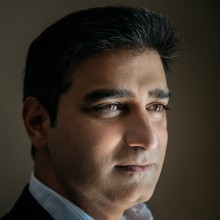 Amed Khan has had an active career in both the public and private sectors, including a wealth of experience from political campaigns, government service and international relief work. Mr. Khan currently directs Paradigm Global Group, a private international investment firm with a focus on Commercial Real Estate, Energy and Technology. He is the founder of Elpida Home, a public private initiative based in Thessaloniki, Greece that provides refugees the humane international protection they are entitled to. He also serves as Senior Advisor to the ClintonGiustra Enterprise Program, an innovative project of the William J. Clinton Foundation.

Mr. Khan held several positions in the United States government including the Director of Operations for the G-7 Summit of Industrialized Nations in 1997. Between 1993 and 1995 Mr. Khan was Special Assistant to the Director of the United States Peace Corps, where he served as the Director’s personal representative on policy and administrative matters including liaison to the White House and coordinating the recruitment and selection of Peace Corps Country Directors.

Mr. Khan is the founder of the Zaka Khan Foundation and serves as its President. He is also on the International Advisory Council for the International Crisis Group, Board of Visitors of the University of Wisconsin-Madison, Political Science Department, and Advisor to the Carlos Slim Foundation.

Mr. Khan graduated from the University of Wisconsin, Madison. He lives in New York, New York.