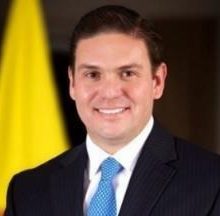 President, ProBogotá; Former Ambassador to the U.S., Republic of Colombia

Juan Carlos Pinzón is native of Bogotá, Colombia, married to Pilar Lozano and has two children, Natalia and Juan Pablo. Throughout his career, Pinzón has been a leader in both the public and private sectors.

Pinzón served as Ambassador of Colombia to the United States, among other achievements the approval of “Peace Colombia” funding package for security and development. Also the establishment of the “CEO US-Colombia Business Council” at the US Chamber of Commerce, and the Atlantic Council Report on the future of US-Colombia relationship.

He was Minister of Defense of Colombia for nearly four years. Under his leadership, the Armed Forces dealt the most severe blows in history to terrorist organizations – FARC and ELN – and Criminal Bands, highly degrading their logistics, structure and leadership. Pinzón also strengthened all capabilities of the Colombian armed forces, and established Colombia as a regional cooperation leader.

His public and private tenure also includes positions such as, Senior Advisor to the Executive Director at the World Bank, Vice President of the Colombian Banking Association, Assistant Vice President of Investment Banking at Citigroup, private Secretary and Chief of Staff for the Finance and Public Credit Ministry, and Economist for Colombia at Citigroup. The World Economic Forum selected him a Young Global Leader in 2011.

Pinzón received an honorable mention for his outstanding academic performance while earning a Bachelor of Science degree in Economics. He holds a Master of Science in Economics from the Pontificia Universidad Javeriana in Bogotá, and he was awarded a scholarship to receive his Master’s in Public Policy from Princeton University’s Woodrow Wilson School of Public and International Affairs. Pinzón also completed advanced courses in international relations and strategic studies at Johns Hopkins University, and in science and technology at Harvard University.

Recently, Juan Carlos Pinzón was appointed President of the Foundation for the Progress of the Capital Region – ProBogota, a space for the discussion and promotion of strategic projects for the Capital region of Colombia.

In parallel Pinzón serves as Chairman of Virtus Global, a firm dedicated to provide consulting and advisory services in different areas such as: national security and defense, public management, corporate development, social responsibility, and investment promotion.