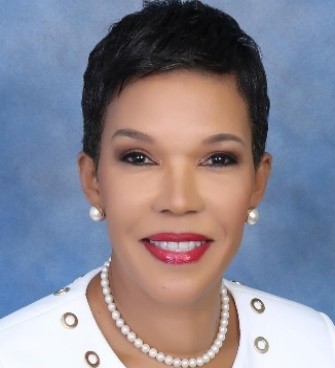 Ambassador of Jamaica to the United States of America

H. E. Audrey Marks is Jamaica’s thirteenth Ambassador to the United States of America and the Permanent Representative of Jamaica to the Organization of American States (OAS).

She created history by being the 1st Jamaican female Ambassador to the USA, and also the first Ambassador to be assigned to the Post twice, having served in the same capacity from 2010 – 2012.

Prior to assuming her Ambassadorial role, Ambassador Marks founded Paymaster (Jamaica) Limited, an on-line paymaster system which she conceptualized and started in 1997. A career entrepreneur, Ambassador Marks started and operated six previous businesses, including a 100-acre banana exporting farm, a transportation company, as well as a real estate sales and development company. She also operated a Venture Capital Company with diverse investments, including manufacturing, travel and entertainment.

She has served on several private and public sector Boards, including as Chair of the Tourism Product Development Company (TPDCo) and Director of the Board of RBTT Securities Jamaica Limited. Ambassador Marks holds the distinction of being the first female President of the American Chamber of Commerce of Jamaica (AMCHAM), an organization which promotes investment and trade between the United States and Jamaica. She is the recipient of numerous citations and recognition from her peers and various organizations for her pioneering work, entrepreneurial endeavours and commitment to social causes.

Ambassador Marks holds a Bachelor’s and Master’s degree in Business Administration from the University of the West Indies, Mona, Jamaica, and Nova University, Florida, USA, respectively.