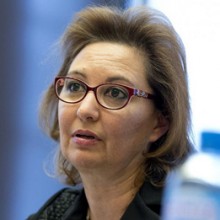 Ambassador Laura Thompson was re-elected as Deputy Director General of the International Organization for Migration (IOM) on 19 June 2014 by the Organization’s Council of Member States for a second five-year term. Ambassador Thompson started her tenure as IOM Deputy Director General on 1 September 2009. With more than 20 years of experience in diplomacy, multilateral negotiation, development, and humanitarian affairs, she has provided leadership for multilateral initiatives and negotiations across the fields of migration, refugees, humanitarian assistance and human rights, and the environment. The Deputy Director General supports the Director General in administering and managing the Organization and approximately 8,500 staff, 440 field offices, and an annual budget of USD 1.2-1.4 billion; defining policies, strategies, prioritized action planning; representing the Organization, building and managing relationships with Member States, Observers, UN agencies and other international organizations, civil society, and private sector; and conducting political dialogue with all counterparts. During her first term, Ambassador Thompson has led the implementation of a worldwide structural reform endorsed by Member States to consolidate the growth and expansion of the Organization; sharpen IOM’s administrative and oversight capacity; enhance IOM’s efficiency and effectiveness; and ensure the Organization’s position as strategic partner to the countries and beneficiaries it serves. The reform entailed developing policies, processes, and systems for strengthening IOM’s coherence and consistency of action worldwide and its quality of programming; ensuring effective oversight, accountability, and performance evaluation capacity; and enhancing IOM’s reliability with donors and partners; and increasing its efficiency and effectiveness in serving beneficiaries. Prior to joining IOM, she was the Ambassador and Permanent Representative of Costa Rica to the United Nations Office and other International Organizations in Geneva (2007-2009). Previously, she served as Counsellor (1996-1998) and First Secretary (1994-1996) at the Permanent Mission of Costa Rica to the United Nations in Geneva, and as Cultural Attaché (1989) at the Delegation of Costa Rica to UNESCO in Paris. During her diplomatic career, she has held leadership responsibilities within humanitarian affairs at key governing bodies, including Chair and Vice-Chair of the Executive Committee of the United Nations High Commissioner for Refugees (2007-2009), Chair of the Executive Committee of the IOM (1996-1997), and Vice-Chair of the Council of the IOM (1997-1998). She also acted as chair or vice-chair of governing bodies of the United Nations Compensation Commission, the World Intellectual Property Organization, and the International Labour Organization. In addition to her diplomatic experience, she has worked as a Legal Officer for international organizations in Geneva, including the Security Council’s United Nations Compensation Commission (1998-2004) and the Secretariat of the Basel Convention on the Control of Transboundary Movements of Hazardous Wastes and Their Disposal (2004-2007), experiences that equipped her with in-depth understanding of the functioning of international organizations. Ambassador Thompson holds a Master’s degree in International Relations, specializing in international law, from the Institut Universitaire de Hautes Etudes Internationales in Geneva. She also holds a Law Degree from the University of Costa Rica and has completed Executive Education at the John F. Kennedy School of Government at Harvard University. In addition to Spanish, her mother tongue, Ambassador Thompson is fluent in English, French, and Greek, and has a basic knowledge of Italian and Portuguese.