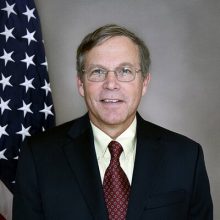 Ambassador John A. Heffern, a career member of the Senior Foreign Service, served as the U.S. Ambassador to Armenia from 2011-2014. Prior to his current faculty position at Georgetown, he was the number 2 and then the number 1 in the State Department’s Bureau of European Affairs.  His prior experience included Deputy Chief of Mission (DCM) at USNATO, Brussels; DCM in Jakarta, Indonesia; and, Executive Assistant to the Under Secretary for Political Affairs.  During his 36 years in the Foreign Service, Heffern has served in several East Asian and European posts, as well as one African post.  He is married, with five adult children and three grandchildren.