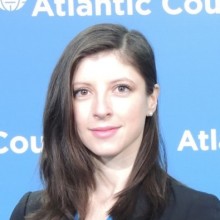 Alina Polyakova, PhD, is the Deputy Director of the Dinu Patriciu Eurasia Center at the Atlantic Council. She is the author of The Dark Side of European Integration (2015), a monograph that examines the rise of far-right populism in Europe. Dr. Polyakova is a term member of the Council on Foreign Relations and a frequent media commentator on developments in Ukraine, Russia, and Europe. Her writings have appeared in major publications such as The New York Times, Wall Street Journal, Foreign Affairs, Foreign Policy, The American Interest, Newsweek, and academic journals. Concurrently, Dr. Polyakova is a Swiss National Science Foundation Senior Research Fellow and coinvestigator on a multi-year project examining the rise of far-right political parties in the European Union. She has been a fellow at the Eurasia Foundation, the Woodrow Wilson International Center for Scholars, the Fulbright Foundation, the National Science Foundation, the Social Science Research Council, the International Research and Exchanges Board (IREX), and a Senior Research Fellow and Lecturer at the University of Bern.

Dr. Polyakova has served as an adviser to non-governmental organizations in Europe and the United States working to promote democratic transparency, accountability, and governance reform in Eastern Europe generally and in Ukraine particularly, including most recently the Open Government Partnership. She has worked with civil society in Ukraine and has taught courses on European politics and societies at the University of California, Berkeley, and the University of Bern, Switzerland.

Dr. Polyakova holds a PhD and MA in Sociology from the University of California, Berkeley, and a BA in Economics and Sociology with highest honors from Emory University. Originally from Kyiv, Ukraine, she speaks Russian and German.