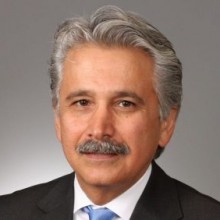 After graduating from the University of Tulsa with a bachelor’s and a master’s degree in petroleum engineering, in 1976 and 1978, respectively, he joined Chevron as a reservoir engineer and later as a drilling engineer. In 1983, he became senior production engineer with supervisory responsibilities in the Gulf of Mexico.

From 1983 to 1987, he served as supervisor of Reservoir and Facilities Engineering for Chevron Energy Technology Company in Houston, with responsibilities supporting upstream activities. In 1987,Mr. Moshiri joined Chevron Overseas Petroleum in the United Kingdom as manager of Technical Applications for exploration and production activities in the North Sea.

In 1991 he became supervisor of Petroleum Engineering for Chevron Overseas Company, with responsibilities for petroleum engineering activities in international operations. Between 1992 and 1997, he held a variety of positions of increasing responsibility as manager of Petroleum and Facilities Engineering operations, including worldwide operational support, new opportunity assessment and operational feasibility, as well as support for petroleum and capital projects and with exiting operations.

Mr. Moshiri was named general manager of Strategic Planning and Assets Evaluation for Chevron Overseas in 1997 with responsibilities over 10 international strategic business units, including mergers and acquisitions and new business development. In 2000, he assumed the position of general manager and advisor to the vice chairman of the Board for Chevron Corporation Exploration and Production.

In October 2001, Mr. Moshiri was appointed managing director of Chevron Latin America Exploration and Production, where he was responsible for upstream operations in Argentina, Brazil, Colombia, Trinidad, Mexico and Venezuela.

Mr. Moshiri has been the chairman of the Venezuelan Association of Hydrocarbons and is a board member of the Council of the Americas, the Institute of the Americas and the Pan-American Development Foundation and the Trust of the Americas, Organization of American States.

He is married to Maria Luisa (Misi) Breisacher-Moshiri.