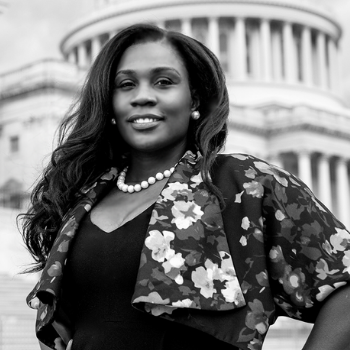 Ms. Algene T. Sajery serves as Vice President of the Office of External Affairs at DFC. In this capacity, Ms. Sajery leads a team of public affairs, intergovernmental relations, and stakeholder engagement professionals. Together they cultivate DFC’s relationships with Congress, federal agencies, the business community, civil society groups, and other key stakeholders to advance DFC’s mission. Ms. Sajery also leads DFC’s 2X Women’s Initiative and supports diversity efforts in the agency. As a member of DFC’s Executive Leadership Team, Ms. Sajery holds a seat on DFC’s Investment Committee, providing input on all projects valued at more than $20 million, and engages with the agency’s Board of Directors.

Ms. Sajery is a seasoned foreign policy and national security policy expert with over 20 years of legislative and political affairs experience in the U.S. Congress, political campaigns, and in the corporate and nonprofit sectors. Prior to joining DFC, she owned a small business specializing in strategic advisory services.

A native of Liberia, West Africa who came to the U.S. at age three as a political asylee, Ms. Sajery has dedicated her career to advancing human rights, rule of law, global health, food security, and economic development in the developing world. From 2012 to 2020, Ms. Sajery served as senior foreign policy and national security advisor to U.S. Senator Ben Cardin (MD). From 2015 to 2018, she concurrently served as Democratic Policy Director of the Senate Committee on Foreign Relations (SFRC), becoming the first African American woman to serve in a senior leadership role on the prestigious committee.

In her spare time, Ms. Sajery hosts a podcast highlighting the journeys of women of color changemakers in politics and policymaking. She previously served on the Executive Committee of the Leadership Council for Women in National Security, and is a member of Women of Color Advancing Peace and Security, Black Women’s Congressional Alliance, the Win with Black Women Collective, and Delta Sigma Theta Sorority, Inc. Ms. Sajery holds bachelor’s degrees in English and African American Studies from Howard University, completed graduate studies in Global Security at John Hopkins University, and obtained Harvard Kennedy School’s certification for senior executives in national and international security. She is in the 2020-2021 cohort of the National Security Scholars and Practitioners Program, a thought leadership program of Johns Hopkins University’s Center for Strategic Studies.