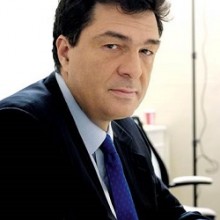 Born in Athens in 1961, Alexis Papahelas studied History and Economics at Bard College and received a Masters in International Affairs and Journalism at Columbia University. Until 1998 he worked as a U.S. correspondent for various newspapers, television and radio networks. He returned to Greece in 1998 and co-anchored the respected news magazine «Mavro Kouti», broadcasted by MEGA Channel and worked as a senior editor for the newspaper «To Vima».

He is now the Editor-in-Chief of “Kathimerini”, the leading newspaper of Athens and a presenter of the “Stories” Television news program . He is also the Secretary General of the Hellenic Foundation for European & Foreign Policy, the main Greek think tank. Mr. Papahelas was named as one of the most influential Europeans for 2015 by POLITICO. He is the author of two books, “the Rape of Greek democracy” which focuses on the US role in Greek politics in the 1960’s and “November 17” , a book about the notorious Greek terrorist organization.