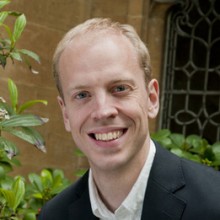 Alexander Betts is Director of the Refugee Studies Centre, Leopold Muller Professor in Refugee and Forced Migration Studies, and Fellow of Green-Templeton College, at the University of Oxford.

He began his studies at Durham University, where is received First Class Honours in Economics. During his undergraduate studies, he first began to work with refugees, undertaking voluntary work in the Netherlands at a reception centre for asylum seekers. What struck Alex most was the tragedy of people with skills, talents, and aspirations being placed in a state of limbo and deprived of the right to work. The experience inspired an undergraduate dissertation, which was subsequently published in the Journal of Refugee Studies.

Recognising the situation of many refugees as inherently political, Alex decided to redirect his studies towards a focus on politics and international relations. After completing an MSc in International Relations at Bristol University and an MPhil in Development Studies at Oxford (both with Distinction), he wrote a DPhil thesis that focused on explaining the conditions under which international cooperation can overcome longstanding refugee situations. The thesis was completed in a record time of less than 18 months while working at UNHCR Headquarters in Geneva, receiving the Winchester Prize for best DPhil in International Relations. It was published as Protection by Persuasion: International Cooperation in the Refugee Regime by Cornell University Press.

In 2010-11, Alex spent a year at Stanford University, which opened up a new way of thinking about refugees and humanitarianism. Being based within Silicon Valley and surrounded by technology and start-ups, he was struck by the potential of some of these ideas to transform humanitarian assistance. Returning to Oxford to take up the position of Associate Professor in Refugee and Forced Migration Studies, he founded the Humanitarian Innovation Project (HIP), with a grant from Stephanie and Hunter Hunt, with an initial aim of exploring the role of technology, innovation, and the private sector in refugee assistance. The project has undertaken pioneering work on Refugee Economies, building one of the first data sets on the economic lives of refugees based on a survey in Uganda, as well as developing cutting edge thinking on how the conceptualise a people-centred approach to humanitarian innovation. The project also led to the creation of the annual Humanitarian Innovation Conference. Alex was final shortlisted for the TED Prize in recognition of this work.

In October 2014, Alex assumed the role of Director of the Refugee Studies Centre (RSC), becoming its sixth and youngest Director. Since joining the RSC, Alex has raised over $2million in funding and has sought to consolidate the centre as the leading independent academic research centre in the area of Refugee and Forced Migration Studies. Under Alex’s directorship the Centre has consolidated its particular strengths in research on the political, legal, and ethical dimensions of forced migration. In July 2015, he was promoted to Full Professor by Oxford, becoming one of the youngest professors in its recent past.

Alex has successfully supervised 10 DPhil students and over 30 Masters students, designing and teaching graduate classes across politics and international relations, development studies, and public policy. He has also taught undergraduates for Wadham College, LMH, St John’s, Hertford, and New College within Oxford. Meanwhile, he has contributed directly to policy and practice, with Alex serving on the thematic working group on ‘Transformation Through Innovation’ of the World Humanitarian Summit, co-chairing the Research, Data, and Performance Management Working Group of the Solutions Alliance (an informal network seeking sustainable and innovative solutions for refugees), and sitting on UNHCR’s innovation council, the ‘i Circle’. He has also worked as a consultant and advisor to a range of humanitarian organisations and governments, including UNHCR, OCHA, UNICEF, IOM, UNDP, and the Governments of Switzerland and Norway.