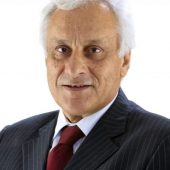 Chairman of the Board of Advisors, The Tahrir Institute for Middle East Policy

Alex Shalaby is a retired telecommunications executive with extensive experience in the field both domestically internationally. He spent more than 28 years with AT&T after immigrating with his wife Magda to the United States from his native Egypt in 1969. He continues to be active both in his professional field as well as with various NGO’s dealing with Human Rights issues and development, primarily those working in his native land and the Middle East and Africa region in general.