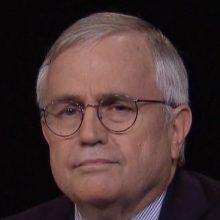 Director and Professor, Institute for Rural Journalism, University of Kentucky

Al Cross is director of the Institute for Rural Journalism and Community Issues, which helps rural news media define the public agenda in their communities and report on broader issues that have local impact but few local sources. The Institute is based in the University of Kentucky’s School of Journalism and Media, where he is an Extension professor, meaning that most of his work is directed off campus. Cross helped organize the Institute, which has academic partners at 25 universities in 17 states. He became its director in 2004, after more than 26 years as a reporter at the Louisville Courier Journal, the last 15½ as political writer. He writes a political column about twice a month for the CJ and the Kentucky Center for Public Service Journalism, and is a Kentucky Educational Television election commentator. He was executive producer of “From Honor to Medal: The Story of Garlin M. Conner” (KET, May 2020) and author of “Trump and non-metropolitan America: An urbanite saw a rural base where pollsters and journalists didn’t,” a chapter in “The Trump Presidency, Journalism and Democracy” (Routledge, 2018), and the Kentucky Encyclopedia article on Gov. Wallace Wilkinson, and was a major contributor to “Kentucky’s Governors” (University Press of Kentucky).

He and his brother David, an Albany attorney, co-authored “Republican Redoubt: The Politics of Kentucky’s Upper Cumberland,” “in People of the Upper Cumberland” (University of Tennessee Press, 2015). He was part of the Courier-Journal team that won the 1989 Pulitzer Prize for covering the nation’s deadliest bus and drunk-driving crash. In 2011 he received the Wells Key, the top honor of the Society of Professional Journalists, the nation’s oldest, broadest and largest journalism organization. He was national SPJ president in 2001-02, and has received awards from SPJ’s Louisville Chapter. His other awards include the Kentucky Journalism Hall of Fame (2010), the James Madison First Amendment Award of the Scripps Howard First Amendment Center at UK (2015), the media awards of the East Kentucky Leadership Foundation (2006) and the Kentucky Psychological Association (2013). Cross is often quoted nationally on Kentucky politics and has appeared on “Washington Week In Review.”

He is secretary of the Kentucky Judicial Campaign Conduct Committee, a non-profit, non-partisan organization. He is a graduate of Western Kentucky University. He wrote for the Clinton County News and was an announcer at WANY in his hometown of Albany, Ky. He was an editor and manager of weekly newspapers before establishing The Courier-Journal’s Somerset bureau in May 1978, moving with it to Bardstown in 1979. He was a city reporter in Louisville in 1984-86, joined the CJ Frankfort Bureau in 1987 and became political writer in 1989. He has covered every Kentucky legislative session since 1980.