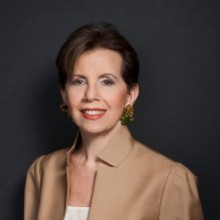 Adrienne Arsht is a business leader and philanthropist.  She has taken a leading role promoting artistic, business and civic growth in the three cities she calls home: Washington, D.C., Miami and New York. She is Founding Chairman of the Adrienne Arsht Center Foundation in Miami, Florida.  Her $30 million contribution to Miami’s Performing Arts Center in 2008 secured its financial footing and ensured quality cultural programming.  In her honor, the Center was renamed the Adrienne Arsht Center for the Performing Arts of Miami-Dade County.  Her contribution of $11 million in support of the transformation of Lincoln Center’s facilities and public spaces was recognized with the dedication of the Adrienne Arsht Stage in Alice Tully Hall in 2012.

Ms. Arsht is a Vice Chairman of Lincoln Center for the Performing Arts, and Executive Vice Chairman of the Atlantic Council. She is on the Trustees Council of The National Gallery of Art and a Board Member of the Blair House Restoration Fund. She is a member of the Council on Foreign Relations and is former President of the Vice President’s Residence Foundation.  She is Trustee Emerita of the University of Miami and an honorary board member of Amigos for Kids.

A 1966 graduate of Villanova Law School, Arsht began her Delaware law career with Morris, Nichols, Arsht & Tunnel. In 1969, she moved to New York City and joined the legal department of Trans World Airlines (TWA).  She then became the first woman in the company’s property, cargo and government relations departments.  Arsht moved to Washington, DC in 1979 where she initially worked with a law firm, then started her own title company before moving to Miami in 1996 to run her family-owned bank, TotalBank. From 1996 to 2007, Arsht served as Chairman of the Board of TotalBank. Under her leadership, TotalBank grew from four locations to 14 with over $1.4 billion in assets. In November 2007, she sold the bank to Banco Popular Español. Arsht was named Chairman Emerita of TotalBank.

Over the years, Arsht has generously donated funds and resources to numerous organizations.  In 2008 she became the first, and still is, the only woman to join the Five Million Dollar Roundtable of United Way of Miami-Dade. Arsht made a $2 million gift to Goucher College, creating the Roxana Cannon Arsht Center for Ethics and Leadership, in honor of her late mother, a Goucher graduate. Arsht committed more than $6 million to the University of Miami to support the university-wide Arsht Ethics Programs, assist the Bascom Palmer Eye Institute of the University of Miami and support other University of Miami priorities.  In February 2009, Arsht funded the creation of the Best Buddies Delaware chapter to specifically serve Hispanics and African-Americans with mental disabilities. The Chronicle of Philanthropy ranked Arsht number 39 on its 2008 America’s 50 biggest donors list.

She is the daughter of the Honorable Roxana Cannon Arsht, the first female judge in the State of Delaware, and Samuel Arsht, a prominent Wilmington attorney. Upon graduation from Villanova Law School, Arsht was the 11th woman admitted to the Delaware bar – her mother having been the 5th.  A graduate of Mount Holyoke College, Arsht is a member of the Delaware Bar. She was married to the late Myer Feldman, former counsel to Presidents John F. Kennedy and Lyndon B. Johnson.