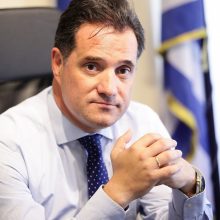 Adonis Georgiadis was born on November 6th, 1972, in Athens. He graduated from the Faculty of History & Archaeology of the School of Philosophy of the National & Kapodistrian University of Athens.

In 1993, he took over the management of publications ‘GEORGIADIS-LIBRARY OF GREEK’. In 1994, he founded the Liberal Studies Center “GREEK EDUCATION”.

On January 18th, 2016, he was appointed one of the two Vice-Presidents of the Nea Demokratia by decision of Kyriakos Mitsotakis, the President of Nea Demokratia.
He is married to Eugenia Manolidou and they have two children, Perseus and Alcaeus.