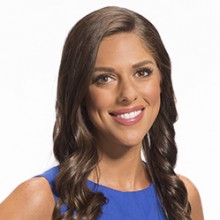 Co-Host of the Cycle, MSNBC

Abby Huntsman is the co-host of MSNBC’s ensemble show, “The Cycle.”

Prior to joining MSNBC, Abby was a host and producer for HuffPost Live, The Huffington Post’s streaming network, where she interviewed politicians and celebrities, as well as led discussions on everything from world affairs to lifestyle. She was also a frequent political commentator on MSNBC and CNN.  Abby was named one of Forbes 30 under 30 for media in 2013.

She is the daughter of former presidential candidate, Jon Huntsman and worked on his 2012 Presidential Campaign as a media adviser and surrogate. Huntsman and her sisters, the Jon2012Girls, became known for their witty tweets and a parody video to the Herman Cain “Smoking Ad.”

A native of Utah, Huntsman received a Bachelor of Arts in Political Science and Communications from the University of Pennsylvania in 2008.